The CBC and 10-Year Plans

When I was 20, I wrote myself a 10-year plan. To keep a long, anal-retentive story short, to complete the list I had to check off this particular point: get book deal with major publisher by the age of 30. I'm still not sure what 30-Year-Old Me thinks about this "failure" of mine. I haven't quite come to terms with being this old, let alone missing such a deadline. 20-Year-Old Me is pretty pissed though.
Anyways, let's see what else has been going on. Oh yes. I sent my pilot pitch off to the CBC. By the way, if you want to do the same, click here. I wish someone had told me about the magic phrase "independent producers" sooner. But now I know -- thank you friend of a friend of a friend at that barbeque. Sorry if I spit some corn water on you. It was very juicy, as you may recall.
So I pitched, and two days later I got a response. I can hardly believe it myself, but the CBC wants to see my pilot. Good news, right? Sort of. See, I wasn't expecting to hear from them for a few weeks. I figured I'd have time to Canadianize the thing and stretch it out by 15 pages or so into a full-length drama.
Let's just say I've been scrambling like crazy for the past two weeks and I do not eat eggs.
But it's almost done. And get this, 20-Year-Old Me: I like it. I like it a lot. So I'm sorry that I let you down. I'm sorry I didn't get you a publishing deal. But I'm so much happier here in TV Land. It's a friendlier neighbourhood with so much less snobbery. Everyone in TV Land owns a TV. They don't sneer at me for watching The Bachelor, for spending entire weekends with ginger-haired serial killers and misogynists in skinny ties. So it's okay, 20-Year-Old Me, we'll get there eventually. The road will just look a little different. It will be have more dialogue and less exposition. It will be more plot-focused and more fun. The formatting will be a f#%&ing bitch, though.
Posted by Emily Saso at 10:02 PM 2 comments: 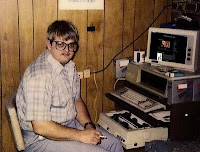 Okay, it's not as though I believe that this software can actually "read" my writing, or even that the programmer behind it can read anything but Internet boobies and code (half of which looks suspiciously like Internet boobies, by the way: 00 00 00). But THIS is who it "thinks" I write like? Really? Really?? Really.
If you can take it, try the test yourself. I'm currently in the throws of regret and could use some company.
Posted by Emily Saso at 6:15 PM 5 comments:

The First Rule of Write Club... 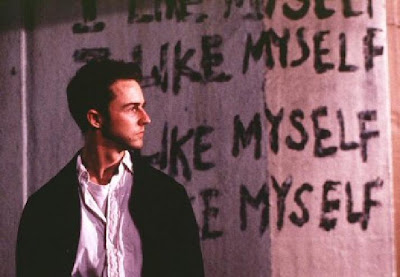 "By the way, that sounded like Solitaire, but it’s not." That's what she said. No really. That's what my friend said to me the other night as we sat down, laptops in laps, to work on our respective writing projects. We're the most frequent attendees of Write Club, a place where a few writer friends and I get together, eat take-out, gossip and then actually get some writing done for an hour or two. It's not one of those groups where the members hem and haw their way through those little writing exercises that let my kind procrastinate even more than we're already prone to. No sir! Real, honest to goodness writing actually takes place in my club.

Write Club has been, perhaps, the most important new element in my writing life these past few years, and I'm grateful I have friends who take it seriously. The Club holds me accountable -- it makes me feel like an asshole if I haven't been writing on my own time, and it makes me feel like an asshole especial if I don't use my WC time for writing.

Which is where that above quote comes in. It's true, for all I know, my friend could have been playing Solitaire. Typing away in an isolated little corner by the speaker in my living room, Japanese food containers strewn around us -- both of us could have been up to anything at all but writing, I suppose. But we almost always write. Because we almost always love it.

Anyhow, before I started wrestling with some TV writing, here's what I managed to create for my poor, nearly forgotten second novel at this WC meeting:

My downstairs neighbour has a poodle. It's white and bigger than I always expect because I always think small when I think poodle. It doesn't really ever bark or chase cars or anything. It's got much more self control than I do. It's quite skinny as well which substantiates my theory about self control. I didn't think dogs could do that sort of thing, stop themselves when they've had enough, or even know what enough was. Sometimes even I forget so I try to spend as much time with the poodle as I can. This is easy because my upstairs neighbour lets him out the front door and leaves him in the yard for hours sometimes, even in the winter. It sounds cruel but it's not. If you saw my downstairs neighbour you would understand. She's not built for waiting so who's fault is that? It's not the poodle's so I frequently let him through my patio door for leftovers. Some dry toast or spaghetti or the smallest bit of butter because he just wants a taste.

So if you haven't your own Write Club, I highly recommend forming one. Not because I think this bit of writing is so great, but because it likely wouldn't exist at all without it. 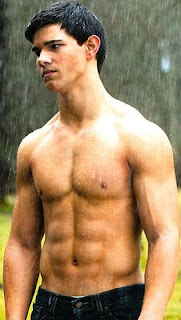 So I went to see the latest Twilight movie last night and had a great time. But before we got into the theatre and grabbed our seats next to a bunch of overweight, 45-year-old Twihards, my friends and I were approached by two irritating people (a.k.a "marketing executives"). Standing next to the Twilight step & repeat, they were doling out the newest line of tampons, pads and liners from Kotex. Eww.
As gross as it was for the Kotex people to recognize the limitless co-branding possibilities between their blood-related products and Summit Entertainment's blood-related products, the actual pads were the worst part. The packaging of this new "savvy, urban girl-power" menstruation marketing strategy is done in Las Vegas-style, impossible-to-miss neon. Bright pink, fluorescent purple and electric blue pads and tampons? Right. Because that's exactly the kind of thing I want spilling out of my purse on the subway.
Anyways, tampon tragedy aside, the literary horror / delicious cinematic lobotomy that is Twilight inspired me to try writing a new pitch to a new TV agent. And by incredible coincidence, the agent's last name is almost "Meyers" -- the author who brought all of us over-30s a little closer to large-scale pedophilia arrests. I took this as a sign. Here's the fated letter:
Hello Ms. Myers,
I'm a Russian spy moonlighting as a 29-year-old professional writer in Toronto (Wired, The Toronto Star, Inside Entertainment...) and I have a very funny spec (an episode of NBC's Community) that I'd love to send your way. An evil ivy scam, an Eastern Bloc prostitute, career assessment day, Mouldy and Scully... I know I've put together something original, smart and hilarious that NBC will eat up.
I've also just finished writing a pilot. The show is a drama with a dark comic edge called Happy Armageddon. It follows the life of Avery -- a conflicted 24-year-old dealing with the fallout of her boyfriend's decision to become a Jehovah's Witness. If I had to compare it to something I'd say a Weeds/Big Love combo would be close. My pilot has even been compared to Истории в деталях. But now I'm just bragging.
If you're interested, I'd love to send my spec or pilot (or both) your way. Or give me a call. I'm (mostly) confident that my phones aren't tapped.
Thanks very much for your time and consideration.
Do svidaniya!
Id
P.S. I'm not really a Russian spy, by the way. But wouldn't that be the coolest?
And in case you're wondering, Readers, yes of course I took the free Kotex. What do you think I am? Employable?
Posted by Emily Saso at 11:32 AM No comments:

Labels: agent, Kotex, pilot, Twilight
Newer Posts Older Posts Home
Subscribe to: Posts (Atom)
This blog is about the ups and downs of the writing life by me, Emily Saso, novelist and screenwriter.
www.emilysaso.com