I told myself I wouldn't post any excerpts from my novel-in-progress ever again. But I really really wanted to send a query out to an agent today because I found the perfect one (I think) on Guide to Literary Agents (not Oritz). I got all excited and crazy and weird, as if I had to send a pitch + pages now now NOW. But that would be so stupid, so dumb, so suicidal, because I have months of edits to go (and a paid-for independent editor's assessment to survive) before I can even think about putting my book out there again. So I resisted the urge to pitch this agent and, as a compromise with myself, decided to post a sample here instead. It's the first few pages of A Happy Armageddon. Because I'm itchy, that's why. And I'd blow up if I didn't.

He did not smell like fish so I married him. Back in my town that was more than most brides could say. He was short but they were all short. Something about my people's men staying low to the ground in those days. Maybe their bodies knew the war was coming so they just didn't bother. So he was not perfect but he was good and he had no bad smell around him as I mentioned.

My dress was simple by the standards of American women and a bit yellow around the edges. My mother wore it before me and her mother before her. But that was as far back as it went because no one of a good mind would wear something older than that. There was a little spot of blood on the hem that no one would talk about, so there may be a jealous lover somewhere back in the history of the lace. You never know with dresses, they can be dangerous things. There is a lot of danger surrounding a wedding too, in the before, during and especially the after. The priest told me it was a wife’s duty to give her husband what he needs when he needs it. When he left the room my mother pulled me into the corner and told me to lift my hips up and really jut them into the air because that will do wonders and to never ever speak of this again. Tourists come to that church now and pay big money for weddings. They like the wide floorboards and the coloured glass and the view oh the view and the crackling walls that sweat in the summer. They called it quaint in an American magazine that I found on the beach and I’d like to look that up.

My husband was waiting for me at that altar before he was my husband but I’m not sure of the word for that. He hated me then I think. He didn't look at me, not once, when I walked down the aisle. His back was short up and down but tall from side to side. It was covered in black cloth that was probably new because men were allowed to start fresh. I wanted him to look at me since I was a girl and what girl doesn’t want their man to look at them with longing and joy at least once? I coughed twice. But he did not turn. I jutted my magic hips forward. But he did not turn. I felt the humid air cool right then so I knew what was coming. (A girl who lives by the sea knows to listen to the weather.) And when I reached him at the altar I could see blood on his lips from where he had been chewing. It trickled into the cup when he took his sip of the wine. Too sweet he said as he passed it to me.

The ceremony was over so fast. A blur, like that band. I still have the disc that tourist with the Mickey Mouse tattoo left behind. I wonder if she misses it or if she even wanted it in the first place. How do you forget something that you’re desperate to? Really really forget it? I’ve always wanted to know. 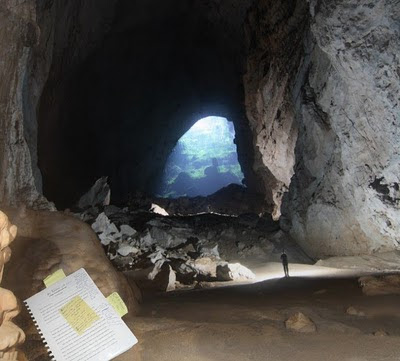 Just kidding! If you're looking for good news, you've tuned in to the wrong blog, my friend. Actually, I suppose I do have good news, at least as far as the content of Ego Burn is concerned. This blog has been sorely lacking in miserable tales of "no's," "no thank you's" and "I regret to inform you's" since my manuscript and I tucked ourselves away in the mystical Cave of First Novel Revision.
Until now.
Last night I got a rejection letter from the Ontario Arts Council. I applied for one of their $12,000 grants. I did not get one of their $12,000 grants. Apply. Reject. Apply. Reject. The back and forth, back and forth of my writing life is almost soothing.
I'm fine with this particular rejection because A) I'm used to* the feeling and B) because I did my last revision after I applied. You see, I've learned that doing revisions is great not just for the state of my book but for making excuses, too. Here's what I mean: "I got rejected. Again? Yes, again. But the manuscript I sent them was old anyways, so it doesn't count. Oh yeah, my book is SO much better now." You get the idea.
Now, who's up for some spelunking?
P.S. - Thanks, Matt!
Posted by Emily Saso at 1:52 PM 2 comments: 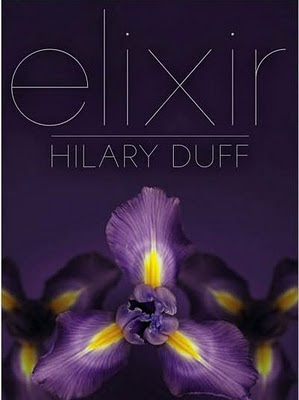 I don't know how I didn't hear about this before but Hilary Duff has a novel out and I was so inspired by her prosey brilliance (see below) that I had to come up with a new word just to express how I feel:
Duffed adj 1 slang to have been beaten by a nearly illiterate celebrity in the race for a fiction deal. (What? Bristol Palin got a fiction deal? Holy f%$&. Look's like I've been Duffed again.) 2 f%$&ed
Here are some samples from Hilary's novel Elixir published by Simon & Schuster:
“His mane of dark, tousled hair, chiseled cheekbones, and thick eyebrows were stunning, but some inward pain twisted his eyes and mouth away from beauty and toward something more difficult and profound.”
“His eyes drew me in, and what I saw there was raw and scarred…but it didn’t lie.”
“I saw an eternity of love in his eyes.”
“[H]e looked like a man who’d wrestled with life and won.”
“I felt devastated inside, like the silent aftermath of a massive hurricane.”
“It had been that way from the day we met—like he could see every place my heart was cracked and would pull open the wounds, inspect them, dig out every bit of infection, then fill them with his love until they healed.”
Every time a celebrity (Franco, Snooki, Paris Hilton's dog) gets a fiction deal, I will take it personally. And you should, too! Writers Without Publicists or Sex Tapes (WWPST) unite! Let's start the WWPST revolution on Twitter today -- before Kim Kardashian gets signed by Hamish Hamilton! #WWPST
Posted by Emily Saso at 7:17 AM 7 comments:

How'd he know that? 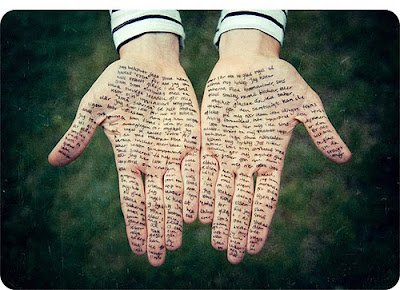 I had my palm read at a party last week and the psychic told me the following things:
1) I am a writer
2) I have a line on my hand that only 5% of the population does, a line that means I am extraordinarily capable of completing creative tasks that require a great deal of follow-through and commitment
3) I'm a constant source of new ideas
4) I am very modest, except when I post about palm-reading experiences
I left that party feeling energized and ecstatic. "I yam a writer," I yelped. "I yam, I yam, I really really yam!" All because this stranger -- who has never read a single word I've ever written -- told me what I wanted to hear.
I am shocked by how much this reading meant to me. It's insane that I needed a party favour to make me feel more secure in myself and my abilities. But I needed to hear it, apparently, because I've been hammering out pages -- hard -- ever since. I had the most productive weekend of re-re-re-writing that I've had in ages. While it's been wonderful to write this version of my book in a bubble this time around, I didn't realize how much I was in need of validation, too, from anywhere I could get it, apparently. Including some dude my boss found in the Yellow Pages.
Now, not all the news was good. The psychic also told me that when published or submitted to agents, my book would not get the reception that I'd hoped for. I chose to take this ESP opinion as a glimpse into my past and not my future. Which is very convenient, isn't it? (Thank you, brain.)
Anyhoo, whatever I may take away from this weird event, one thing is for certain: My success, like any writer's, is truly in my hands. (Awww!)
Posted by Emily Saso at 12:32 PM 6 comments:

Labels: psychic, validation
Newer Posts Older Posts Home
Subscribe to: Posts (Atom)
This blog is about the ups and downs of the writing life by me, Emily Saso, novelist and screenwriter.
www.emilysaso.com