Picture this: the vast council housing estates of North West London, 1975-1985, a young girl who grew up happy and admits it, collecting stories and observations from her neighbours, friends, family, all mashed together from the whole wide world in a place that was meant to be a bucolic Eden (with indoor toilets, private gardens, all the modernities!) that instead got swallowed up by the relentless pressing on of an unstoppable city. Picture the most beautiful skin you have ever seen, the product of a combination of Jamaican and Irish that the world needs more of. Picture all that just a bit older, a bit wiser, on the wide ivyed expanses of Cambridge, one of only four black women on campus. Four. Picture what that does to her mind, already brilliant because of genetics, the influence of friends and geography, books, of having grown up with stairwells encased in glass instead of concrete because she swears that makes a difference. Now picture all that wrapped up in the coolest headscarf you have ever seen and there you have it: Zadie Smith. Sigh.

I was lucky enough to get tickets to her reading/interview/book signing at Toronto’s Harbourfront last night (hosted by the fab Becky Toyne) and I was the opposite of disappointed. I was detnioppasid.

She was jam-packed with so much easy, casual wisdom. I’m paraphrasing, so just picture these words but, like, much more eloquently said. And delivered by a deep voice. I did not expect that voice.:


“I just think that the novel has endless possibilities. I’ll hear from readers and they’re like ‘Argh! Where did the quote marks go? Why didn’t you use quote marks?’ I mean, in what other medium can you evoke such emotion, such anger? And over the smallest thing. It’s just a quote mark! [laughs] So for me the novel is an incredibly exciting form to work in.”

She also spoke about the weirdness of success and how it changes people, not her specifically, but she has been around such people. Men and women so rich that their group of friends has become so tiny that the most important thing all that wealth and success has done to them is make them this: lonely, utterly. And isn’t that strange, she said, because it’s something we’re all supposed to strive for. Success. And then when we get there – in our Range Rovers sealed off from the traffic and our vacations on private islands and our mansions for two and our VIP areas… well, what’s the point? And then she laughed and you knew it would all be okay.

There were so many golden nuggets like that. I wish I had a better memory or that I’d brought a pen. But I couldn’t look away from the stage anyways, so I probably would have ended up scribbling all over my pants. You wouldn’t be able to see the pen because my 9-5 pants are black, always, but I would have known.

And her reading. Wow. Normally I get bored at readings and leave disappointed. But Zadie read like a champion, like a natural who knew how to marry the English language and vocal chords better than anyone had ever managed to do ever. Her reading of her latest book, NW, made me love NW. (Until then, I had only been liking it.) Because now I really understand what she was aiming for. And so now I’m all in.

To hear what Zadie actually said and to hear her read – because you MUST hear her read – the whole shebang will be broadcast on CBC radio’s Writers & Company on October 7. Eleanor Wachtel was a wonderful interviewer, by the way. Even though she didn’t ask a follow-up question when Zadie alluded to a “nearly fatal” incident that made time feel suddenly irrelevant. If you ever bump into her at a party, give it an ask, will you? 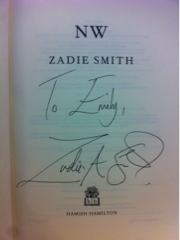 (Or how I learned to stop worrying and love Toronto)

The Toronto International Film Festival, International Festival of Authors, Nuit Blanche, sweaters in the stores and in colours inspired by wine, the end of allergy season, the windows of my place finally getting cleaned (thank you condo board, you disorganized thugs)… This is the time of year when I fall back in love with Toronto.

I wanted to run away from this city for most of the summer. It was too hot and too small, every single tourist was asking my glasses for directions, the AC vent by my subway stop was every day blowing a harassing wind up my skirt, and I was dreaming such beautiful dreams about Broadway, Barter Books and the ocean. But fall is coming, my favourite season out of the four, and I’m feeling my heart grow two sizes bigger for the city I was just itching to get the hell out of. And it was an animal itch, let me tell you, the kind that makes bears rub themselves raw on trees.

The energy here this time of year always wins me back. There’s a real pride about the place and about the culture pouring out of the buildings downtown. (And the laptops, oh my, they are taking over the cafes. They are covered in coffee and ideas.) So for now, I’ve stopped looking for a way out and I’m noticing the good things. That there’s Thai food on every corner. Gluten-free vegan pizza pockets. Writers and readers and artists. Free TVOntario (if you’ve an antenna that’s clever enough to catch it).

So the bear inside me has stopped itching and clawing. He’s in a hibernation of sorts, happy, for now, in his heavily mortgaged cave. Although I can still hear whispers from New York, LA, London and Paris, I’m going to rest now and hope this feeling gets me through the winter.