A promise is a promise

A letter arrived in the mail the other day. It struck fear in my heart for a moment because it was self-addressed. But once the rejection flashbacks withdrew and I remembered what it was, I laughed out loud. In an envelope stamped and mailed by a sweetheart librarian, there it was: the promises I made to myself at the worst writing workshop I've ever attended. 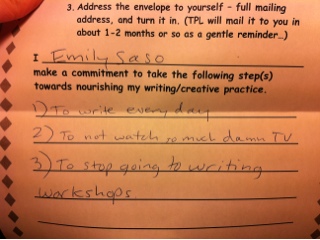 So this is when I compare myself to Hemingway.

My father was in town for a visit this weekend and he brought a literary treasure with him: a stack of Ernest Hemingway's articles from the Toronto Star. If you're a fan of Hemingway's, Toronto should be on your list of places to visit. The man left a mark on this city that, in its darkest days, still gives its citizens something to be proud of. My father's timing couldn't have been better. The Ikea Monkey is the best thing that's happened to our little metropolis in ages.

I have to admit, I'm not a fan of Hemingway's fiction. It's too sparse for my taste and too real. But even I have chased his ghost through the streets of Toronto. I've even been inside an old apartment of his, just up the street from where I live now: 600 square feet perched at the top of a four-storey walk-up, cramped and with an odour of wet carpet and dog, and selling for half a million dollars.

The articles in the collection were reproduced by the Toronto Star (and sold as a special edition for $12.99) exactly as they were originally presented, clumsy typesetting and all. Hemingway wrote scores of articles for the paper between 1920-1924 and had quite a career, eventually being promoted to European correspondent at the age of 22 -- the same age I was when I stood in his former living room shaking my leg free of the real estate agent's dog.

I've taken photographs of a few of the headlines and the introductory chunks of his articles for you to check out. Though the ink is faded, Hemingway's voice is so bold, so Hemingway. He is aggressive and witty and with every word trying to convince us that he is a MAN, God dammit. 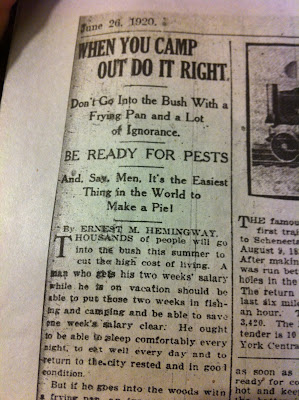 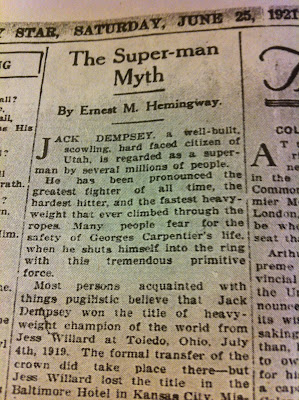 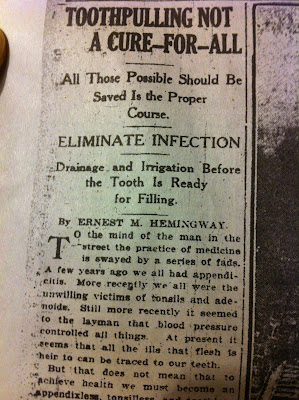 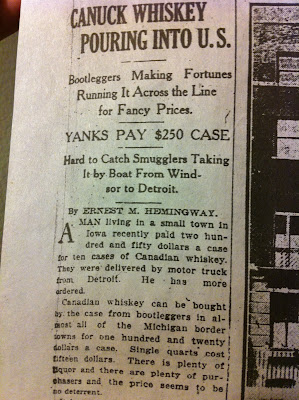 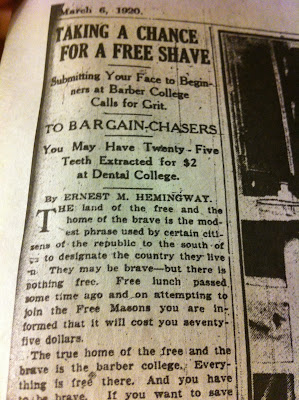 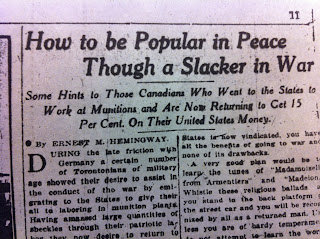 One of the most fascinating pieces of his that I came across was "How to be Popular in Peace Though a Slacker in War" -- a scathing, sarcastic teardown he wrote about Canadian men who went to work in U.S. munitions factories during WWI only to make 15% on their U.S. cash back in Canada. It's smart and snarky and speaks of the greed of men in the way only a greedy man himself could understand. Here's a taste:


"A good plan is to go to one of the stores handling second-hand army goods and purchase yourself a trench coat.... The trench coat and the army issue shoes will admit you at once into that camaraderie of men which is the main result we obtained from the war. Your far-seeing judgment in going to the States is now vindicated. You have all the benefits of going to war and none of its drawbacks."

I may not be a fan of Hemingway's literature, but I am a fan of his journalism and -- speaking of greed -- I take great personal comfort in it. I mean, satirical war editorials aside, Ernest Hemingway wrote shitty service pieces about camping and bargain hunting and then went on to be celebrated as one of the greatest writers of all time. As a former trade magazine editor and occasional freelance contributor to the Toronto Star myself, it makes me think that there's hope for me as well. Not as grand, of course, but maybe a small piece of the kind of career that Hemingway had. Like tiny small. A square inch.

Apparently Hemingway kept his Star clippings for his entire life, which says a lot about how  he felt about his time there. I'll always keep mine, too. Not for my portfolio -- my byline-chasing days are done -- but out of gratitude for the sparks of imagination they helped ignite in my fiction.
Posted by Emily Saso at 1:04 PM 4 comments:

Guess what I bought!

Labels: Apple
Newer Posts Older Posts Home
Subscribe to: Posts (Atom)
This blog is about the ups and downs of the writing life by me, Emily Saso, novelist and screenwriter.
www.emilysaso.com