You know those enormous pieces of paper that primary school teachers and motivational speakers use? Around 25 x 30.5 inches, usually resting on an easel that is perpetually on the verge of being tipped over by an 8-year-old math nerd or a super fan who rushes the stage? I don’t know about you, but I have a tendency to respect and obey whatever is written on those large sheets. As though if something is that big, it must be important.

My friend Yvanna, who’s a teacher, sent me a little gem the other day and it was written on one of those all-knowing sheets. She found it in a fellow teacher’s classroom, snapped a photo and sent it my way. I found its wisdom to be so simple and inspiring that I thought you’d like it too. 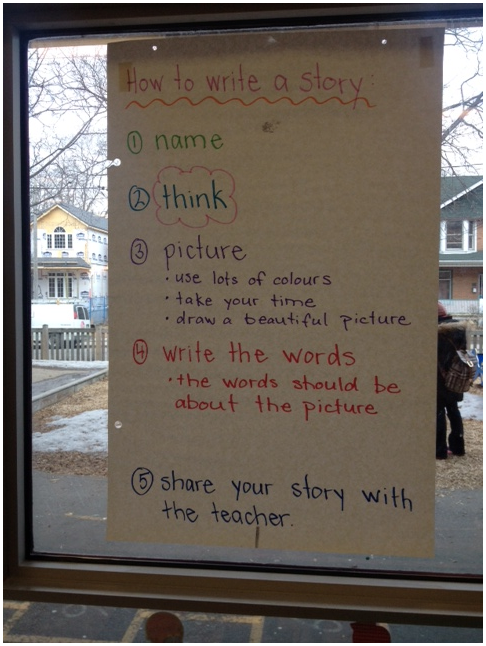 Then I thought it would be a useful exercise to think like a 1st-grader and apply these tips to my second novel, which is currently in progress.

1) Name
I hate the name of my story. Hate! Hate! I called it “It’s Safer Underground” because I was a stupid-head. But I don’t wanna be a stupid-head and so I will change it.

2) Think
Thinking is the funnest part of writing! I get so excited when I think up new ideas that I almost pee!

3) Picture
I am writing a big-kid book, which means no pictures. But I can still draw the scene inside of my head! And if I take my time, and am real careful, the picture will turn out as handsome as Justin Bieber. xoxoxoxo

5. Share your story with the teacher
I don’t like sharing, but I will do it. Mostly because I want other people to share back with me.

What about you? Ever get an inspiring writing tip from a surprising place?

Posted by Emily Saso at 5:30 PM No comments:

I was in one of those moods. You know what I'm talking about. When you're down in the dumps and you walk into the salon and proclaim "I need a change!" The stylist shouts back "Highlights!" because that's what she's always shouting at you. Normally you change your mind and take it back. ("Err... maybe just a trim.") But not this time. This time you say yes to highlights.  "Let's do this!" you cry out -- as though you're on a mission, as though these highlights will change your whole goddam life!

Needless to say, my hair did not live up to my expectations, and now I'm left looking like some asshole at Sbarro baptized me with spaghetti. Not only that, but my 'do is so damaged by the chemicals that it's crispy as cattle hay. It makes a sound, people. Do you understand what I'm saying? Hair should not dispense sound.

But I won’t let bad hair get me down — oh no — because I’m working on novel number two again.

I have mixed feelings about this, but “happy” is definitely one of them. It’s early stages, just so you know, and I’m still wary of getting back into this whole writing thing. But I’m feeling inspired and thinking creatively, which is nice. It’s kind of fun living life as a writer sometimes. Despite all the rejection and the endless waiting, at least being a writer gives you a reason to look at the minutiae of the world and think that it all matters, that it’s worth noting and developing and investigating — or at least worth pulling out your headphones to pay attention to.

You may think that writers are bitter cynics, but there’s an optimism in the “noticing” part of writing, and hope. Which is great, because you sure as hell can't find either at the hair salon.

Posted by Emily Saso at 6:00 PM No comments:

"I saved Latin. What did you ever do?"

Labels: Grand Budapest, Wes Anderson
Newer Posts Older Posts Home
Subscribe to: Posts (Atom)
This blog is about the ups and downs of the writing life by me, Emily Saso, novelist and screenwriter.
www.emilysaso.com