Words (and giant pipes) on the street

I went to Word on the Street Toronto yesterday and what a beautiful clusterfuck it was. Picture dozens of tents and publishers and authors and speakers and tote bags and poutine trucks all snuggled up together at the city’s Harbourfront. Then picture thousands of people buying books, talking books, excited about books. It was loud and crammed and WONDERFUL.

Two highlights included discovering a startlingly good book of poetry by Eva H.D. and catching a glimpse of the Jehovah's Witness tent, which made Armageddon look positively charming! Other A+ moments included hanging out with my pals Amanda and Erin, chatting with Denis from Mansfield Press and the writer Julie Booker, and spending time in the sunshine with my best friend/husband, Anthony.

Another jewel in the crown was the "Sculpting New Reads" event. Billed as “an exciting new visual arts program that brings together Canadian artists and authors to explore how books can inspire new ways of thinking, creating, and innovating,” I expected a little weirdness -- and it did not disappoint. Here's the show and tell.

Exhibit B: The reaction to the giant pipe
The artist did a nice job, so I'm ashamed to admit that I was dying inside of uncomfortable laughter, which was extra awkward given the small crowd. Patrick deWitt, on the other hand, was unfazed and -- I'm pretty sure -- genuinely delighted. Probably because he's not an immature asshole like me. Or because he lives in Portland and is used to this sort of thing. 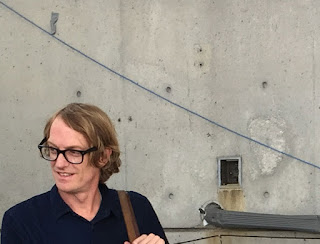 Exhibit C: The inside of the giant pipe
Spoiler alert! The pipe had disembodied fingers in it! 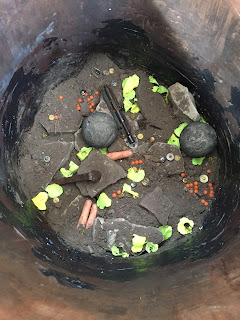 "Once you go green, you'll never go back." (And other wisdom from Cabbage Head.)


Kids in the Hall is one of the many reasons I'm proud to be Canadian. Those darkly hilarious sketches spoke to me as a semi-depressed teenager in a way that SNL never did. Plus, the show exemplified what I think comedians/writers/actors from Canada do best: WEIRD.

I don't think there will ever be anything like it again in Canada's mainstream. As the CBC continues to get squeezed to the rind by Stephen Harper, our national broadcaster just won't risk making counter-culture culture like they used to.

That's why I was so thrilled to see my favorite Kid/Cabbage Head at a Writers Guild of Canada event last night: Bruce McCulloch. It took me back to the good old days -- when I could turn on channel four and see Bruce, Scott, Mark, Dave and Kevin crushing heads and taking names.

Although he's an actor, director and the showrunner behind Young Drunk Punk, Bruce considers himself to be a writer first. And at last night's Q&A with Matt Watts, he dropped some nuggets of wisdom -- as only Bruce can -- that I wanted to share.

"Suicide and writing are both the ultimate selfish act."

"You can't judge it as you're writing it. That's the death of everything."

"Follow your spark and your human spirit. That's the best advice I can give young -- and old -- writers."

Thanks for the advice, Cabbage Head. You're one in a million.

Posted by Emily Saso at 7:30 AM No comments:

This is my coworker Dan. That's me on the right. We have the same shirt. It's hilarious. 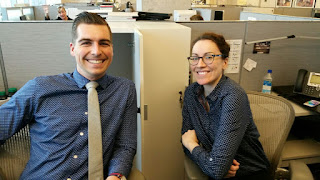 Anyways, yesterday, after a casual water-cooler chat about child soldiers, Dan asked me some questions about my web site WHICH I'VE ANSWERED LIKE FOUR TIMES ALREADY BUT WHATEVER.

That brought us round to a talk about the publishing biz, and when I told him how much money most authors make off their first books, he laughed out loud. When he realized I wasn't joking, he then proceeded to feel very sorry for me.

Then, because aside from stealing my look he's actually a good guy, he came up with an idea.

"Instead of buying your book, I'm just going to give you $5," he said. "That's more than you'd make off the sale, right?"

"I'm not even going to buy your book then. The day it's released, I'm just going to slip you a five."

Because crying at work isn't an option for career women like me, I laughed heartily and said I would accept his most generous offer.

But later, while sobbing on the subway like a professional, I got to thinking: Money be damned. I would much rather make zilch off my book and have readers, than make money and have no readers.

Or, for all you dum dums out there:
No Money + Readers = Happy Enough Sideways Emily
(and yes, I was generous with my cup size up there)

So thanks, Dan, but no thanks. I don't want your charity; I want you to read my novel. And while we're at it, I want you to stop wearing my g-damn shirt!

Labels: Dan, pity, real job, work
Newer Posts Older Posts Home
Subscribe to: Posts (Atom)
This blog is about the ups and downs of the writing life by me, Emily Saso, novelist and screenwriter.
www.emilysaso.com