Because I love to jump on a bandwagon (the seats are pre-warmed!) here's my take on the ubiquitous "Top _____" lists that pop up this time of year. (It's a bit early because I wanted to get this Nene GIF up here reeaaal bad.) As per my list in 2013, this right here is a rundown of the books I read and loved in 2015, not necessarily books that were published in 2015. Although many were. Okay, most were. Whatever. And these are in order of preference, by the way, because I am an opinionated B*TCH WHO OWNS IT.

The Society of Experience by Matt Cahill
Time travel, Toronto and ennui. What more could you possibly want in a book? The writing is damn fine, and it reads like a literary action movie at times — in the best way. I couldn’t put it down. Plus, I ran into the author at Giller Light and he was the nicest guy. Speaking of, here’s a cool interview with him about writing and the like: http://www.robmclennan.blogspot.ca/2015/11/12-or-20-second-series-questions-with_6.html

Station Eleven by Emily St. John Mandel
Another book I couldn’t put down, and another book featuring Toronto… at least until... well... just read it. The cover did not appeal to me and I was feeling apocalypse-weary, so I put off buying this book until a friend with street cred insisted I give in. She was right, of course. I got lost in this arty epidemic dystopia and loved every second. *Cough*

Martin John by Anakana Schofield
Unusual in every way, Martin John feels like a seriously important work in terms of form, style and narrative voice. On the plot side of things, Schofield's insights into the mind of a troubled soul will keep your reading lamp on much longer than you planned, and the relationship between Martin John and his mother is as fascinating as anything Hitchcock could dream up. (Side note - I have typo-related anxiety every time I write "Ana - kan - a Scho - field.")

Not Being on a Boat by Esme Claire Keith
Brilliantly executed, this book is dark and funny as hell. You’ll boo!!! the protagonist and root for him all the same. I don't think I've ever read dialogue as good as Esme writes it -- especially passive-aggressive dialogue, which is an art unto itself. Fans of DFW’s “A Supposedly Fun Thing I'll Never Do Again” will particularly enjoy this.

The First Bad Man: A Novel by Miranda July
I know a lot of people are sick and tired of women writers being called “quirky,” but holy $hit is this book ever QUIRKY. And funny. And sometimes so sexually bizarre I was embarrassed to be seen reading it. But I revelled in every page.

Dirty Rocker Boys by Bobbie Brown
For you gossip fans out there, this book is a treasure trove. It’s not Shakespeare, sure, but even Shakespeare wasn’t Shakespeare, so whatevs. Leave your PhD at the door and dive into this smutty delight. You shall have nary a regret.

Writers: Where does your confidence come from?

For some writers, myself included, fessing-up to having it feels sinful. It’s as if “thou shalt not swagger” is etched on a tablet somewhere sandy and, should we defy the commandment, our talent will disappear, our readers will refuse us, locusts will rain down from a blood-red sky, etc.

Thank goodness all that is BS, right? Because my series on confidence was super fun!! I delighted in reading Erin, Rebecca, Jackson, RL and Alana’s answers to my question “Where does your confidence come from?” Each writer travelled a different path to get to the answer, some taking more scenic routes than others. And I get it; it’s a tough question. But why? Because it’s damn-near impossible to look at ourselves objectively? Or because the answer is inherently Gaga-esque -- because, baby, we were born this way?

Many scientific studies do, in fact, suggest that self-confidence is genetic and that the environment around us has only a negligible influence. (Like this one and this one and this one.) Despite what my former math teacher Mr. Deussing may think, I have a scientific mind, so this genetic explanation makes perfect sense to me. I also believe this because, growing up, had I not had a natural inclination for self-confidence, the outside world was certainly not going to give it to me. (I struggled in school and had a face full of acne long before the ravages of puberty—with no exceptional charms to make up for it.)

HOWEVER, because not even science has the confidence to make wholly self-assured claims, most authors of these "pro-nature" studies are careful to point out that “a genetic legacy of self-confidence merely opens up many possible futures.” Which means there’s a little room for nurture after all.

So, with genetics aside, where does my confidence come from?

That's easy. I can point to it. Literally. Like on a map.

Colonel By Secondary School in Ottawa, Ontario, Canada. Specifically, the gymnasium. My confidence—the malleable element of it—developed from playing volleyball there. I sucked at first. But eventually, with hard work and time and exceptional coaching from Kerry MacLean, I scored points, I made serves, I memorized plays. I became objectively, measurably good at it.


If you’re going for a career as a writer, I think it’s invaluable to have been good at something that can be objectively measured first. Because getting good at something subjective is incredibly painful. Even if I write a novel that I think is good, millions of other people could hate it and tell me so, loudly, in public forums.

I could never have built up my extra cushion of self-esteem by writing alone. If I put all my energy into novels as a teen and never played sports, I seriously doubt I would have had the confidence to move out of my parents' house or lose my virginity, never mind write a book!

Anyways, it's all very complicated, so here's a graph: 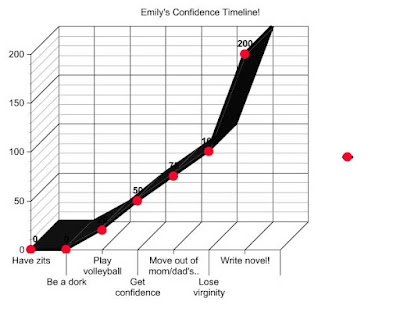 In your face, Mr. Deussing!

Labels: Where does your confidence come from?
Newer Posts Older Posts Home
Subscribe to: Posts (Atom)
This blog is about the ups and downs of the writing life by me, Emily Saso, novelist and screenwriter.
www.emilysaso.com