I'm on the 2016 Crazy for CanLit list, which is put together by the Giller Prize people. Hold your applause: every Canadian author published this year is on it. But I'm on a list, okay, which means I exist, my book exists. So I'm throwing roses and high-fiving myself and champagne is bursting out of bottles, etc.

When I heard about this list via my friend Erin, there was a confusing moment when I thought I had made the long list for the Giller Prize. It made no sense -- I knew this -- but my body still reacted as it does to good news. Sweaty forehead. A tingle up the spine. A "wait wait wait wait wait" rush. Fear.

Being on this list is nowhere close -- not even a little bit -- to being on the long list for the Giller Prize. But I am a capital everything IDIOT, and so I believed in the fantasy, I allowed myself that two-second rush. And then I wiped my forehead with my sleeve, and it was gone.

I don't understand Pinterest so I haven't a clue how one is supposed to interact with this list. Further confusing matters is the page that popped up when I clicked on my book: 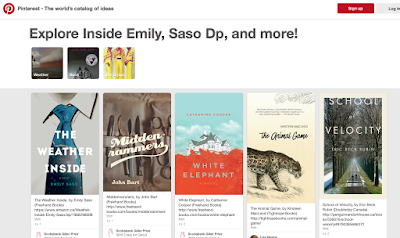 I wouldn't recommend exploring "Inside Emily, Saso," but I would recommend checking out some of the books on this list. (And a big thanks to the Giller Prize people for including me.)
Posted by Emily Saso at 7:00 PM 3 comments:

The sins of self-promotion


Why did I recommend my own novel in the comment section of The Millions "Most Anticipated"?

Because, according to The United Nations Educational, Scientific and Cultural Organization (UNESCO), 19,900 new books were published in 1996 in Canada. A staggering number that, with the ease of electronic publishing, I can only assume has grown even more staggering since.

It’s every writer for herself, people.

Is it unethical to comment anonymously on one's own book? Tough call. I actually do like my own book, so it's not like I'm steering people towards a crappy read. I'm not a journalist recommending a friend's novel in the media even though I know it stinks. I'm not trolling blogs and media outlets or hiring Russian spammers. I'm a writer publishing with a small press just trying to find my readers in a bloated marketplace.

I'm not wholly innocent, of course. I used a screen name on The Millions and, through the wonderfully ambiguous third-person tense, positioned myself more as a fan of my work instead of the author of. Is using a screen name a lie? Is using third-person? Is asking my friends to plug my book in the comments section in the Globe & Mail a lie? Probably, yes. But before you judge me, did you know that 19,900 new books were published in 1996 in Canada?

Self-promotion is awkward for me. Not because I'm humble -- ha! -- but because I judge others harshly for their missteps. I roll my eyes on the daily over authors' self-congratulatory tweets, retweets and worst of all the *retweets of retweets.*

I'd love to find a self-promotion strategy that feels comfortable but, as you probably figured out, leaving comments on book blogs ain't it. Not because I think it's unethical. But because doing so made me feel like an enormous twat.