Yesterday, I wrote my toughest ever scene on my iPhone (without my glasses on) while getting my roots done. Writing can happen anywhere/any time. 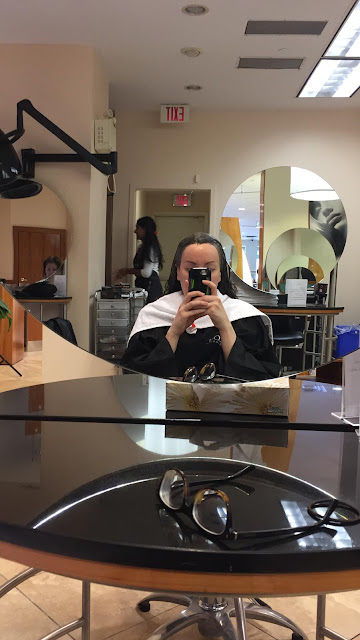 The other day, some people were tweeting about how annoying backstory is in fiction. Sure, backstory done poorly is the worst. Example:


"Traci smokes a cigarette and it makes her remember Evan, her first love. Evan was a fireman with the hairiest muscles she'd ever seen..."

Done well, however, backstory is an excellent narrative device. I love reading backstory for the same reason that I will corner you at a party and ask you questions that span the entirety of your whole goddamn life: because I want to know what makes people tick.

Backstory can also build suspense. Case in point: my new novel. Who are these characters? Why did they get sent to the middle of nowhere? And how in the world will they ever get home? While working on this book, I've learned a few things about writing backstory that I've digested into advice. (Take it or leave it.)

1) Open a chapter with backstory. Are you trying to weave backstory into present action seamlessly, but it comes out sounding like our good friend Traci? Stop doing that. Instead of "weaving," position your backstory at the beginning of a new chapter. Then hit 'return' a few times, switch to whatever style, POV and tense you've chosen for your main story and boom -- you did it. You went from main story to backstory to main story again! Trust me, this is much less annoying than the Traci method. (By the way, I spoke to Joy Fielding about backstory two years ago, and she shared this sentiment.)

2) Spread the backstory around. Because I'm using it to build suspense, my backstory is on a slow-moving trajectory. This means I spread it around strategically. I even highlight it in blue so I can get a good view of how well I've divided it up throughout the manuscript.

3) Do backstory dialogue differently. Description is primary in backstory for me, but when there is dialogue I try to nest it within a paragraph of description. Example:


Evan stood in front of the door. You're not welcome here, Traci. He spit on her shoes.

If I take dialogue out of the backstory description, I don't use quotes. Example:


Around the corner, a worker on break did clumsy pirouettes.
That's a clear violation, the man told Traci.

I do this because backstory is, essentially, memory. And for me, dialogue that is remembered wants to flow smoothly, without the impediment of punctuation. (Also, I don't love the look of quotation marks, so any chance I have to get rid of them, I take.)

Of course, there are a million ways to do backstory and a million decisions that each writer makes along the way that can have an impact. For example, the POV driving your story can make it easier or harder to execute backstory. For my first novel, I found it easier to "weave" in backstory since I was writing in first person. With this new novel, which is voiced by an omniscient narrator, I'm actually finding it much more challenging to do backstory. And I thought it would be the other way around!

Anyways, my main point is that backstory doesn't always have to be as tricky or "weaved in" as you may think that it does.

But enough about me. I'd love to know what you think. What is your opinion on backstory? And how do you structure it in your fiction?
Posted by Emily Saso at 10:00 AM 2 comments:

Posted by Emily Saso at 5:00 PM No comments:

Newer Posts Older Posts Home
Subscribe to: Posts (Atom)
This blog is about the ups and downs of my writing life.
www.emilysaso.com