“TV is getting so novelistic.”


I’m house-hunting right now, which means I hate Toronto. A million bucks, my kidneys and my soul for a moldy semi-detached with no roof? Sold! Should I sign the cheque in my blood or my husband’s?

Luckily, Toronto does have some redeeming qualities, like book festivals. Yesterday I went to Word on the Street (WOTS), which, along with the Toronto International Festival of Authors, is a favorite of mine. The festival is held down by the waterfront and is always bustling.

Yesterday’s edition couldn’t have been more perfect. The sun was shining and the books were discounted. All the big publishers show up at WOTS, but I try to only buy books from the small presses at this event. I love talking to these publishers and discovering gems like poet Tara-Michelle Ziniuk’s Whatever, Iceberg and Susan Perley’s Death Valley. I also enjoy chatting with the team at All Lit Up and snapping up their top picks, like Ali Bryan's The Figgs and Leila Marshy's The Philistine.

In addition to selling zillions of books, WOTS also hosts readings and free panels on writing and publishing. Yesterday, I attended one such panel. Called "Writing in the Age of Peak TV," it featured fiction/TV writers Robert Rotenberg and Lynn Coady. I’m a big fan of Coady’s—she won a Giller for one of my favorite short story collections, Hellgoing, and has written for one of my favorite shows, Orphan Black. Needless to say, I was thrilled to hear her talk about this subject. Her career path is exactly what I'm working towards.

The panel was fantastic. I was listening intently but did manage to scribble down some pearls of wisdom. Here’s some of what Coady and Rotenberg had to say about how writing fiction applies (or doesn’t) to the TV writing room, and the advantages of being a novelist working in TV (or the disadvantages).

“You can’t be precious in TV writing.” - Coady

“We authors have a sense of the whole scope of a story. Which is an advantage.” - Rotenberg

“TV people are interested in books in terms of intellectual property that they can mine. But the fact that we are novelists doesn’t get us through the door.” - Coady

“TV is getting so novelistic.” - Rotenberg

“Worst part of working in TV is the constant anxiety of not knowing when jobs are coming.” - Coady

“A lot people in TV can’t write prose. So when we have to write a treatment we’re on easy street.” - (I forgot to attribute this quote. It may have even been the host.)

“My agent told me I would have an easier time getting a TV show into development if I wrote it as a novel first.” - Coady

Thanks to WOTS for another fantastic day. You almost make up for Toronto's lack of affordable housing.

The Girl With The TIFA Tattoo 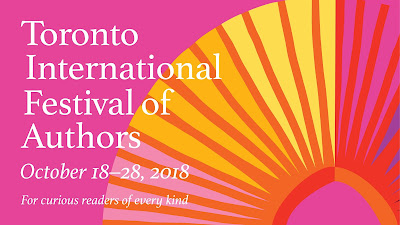 There are loads of TIFA events happening from October 18 - October 28. But because I was raised on David Letterman, I love a top ten. So here it is, my TIFA 2018 TOP 10 (in chronological order).

1. In Conversation: Roddy Doyle With Emma Donoghue
October 18 2018 - 7:00 PM
The Festival’s opening night promises to be one of exhilarating and eye-opening entertainment as two of Ireland’s favourite writers take the stage.

4. In Conversation: Ian Rankin With Linwood Barclay
October 23 2018 - 7:00 PM
Anything can happen when two block-busting bestsellers put their heads together for an hour of solid author intrigue.

9. Writers & Company: Festival Edition With András Forgách
October 27 2018 - 3:00 PM
Eleanor Wachtel chats with acclaimed Hungarian author, translator, dramatist and visual artist András Forgách. Thirty years after the fall of communism in Hungary, Forgách investigated his family’s past only to discover that his mother was a spy for the Kadar regime who had informed on her family and friends. Forgách will elaborate on this story, as captured in his new novel The Acts of My Mother.

10. Double Interview: Esi Edugyan & Meg Wolitzer
October 27 2018 - 6:00 PM
The latest works from Esi Edugyan (who just got nominated for the Booker!) and Meg Wolitzer both address transformative relationships, revealing how one person’s influence can alter the stories of our lives.

There's also an event with Madeline Miller who wrote that hit book Circe. Some fantastic poetry events and slams, and some really special panels on the craft of writing. Not to mention book signings and sales. Oh! And they're doing some free mystery events at Union Station! It's going to be magical. I didn't go to the Toronto International Film Festival this year so I'm going to make up for that cultural deficit by essentially living at Harbourfront Centre from October 18 - 28. (Books rule, films drool! JKJK I love them both.) Plus, I'll be introducing a couple events and taking part in the delegate program, but more on that later.

I hope you can make it to TIFA this year!

Posted by Emily Saso at 6:30 AM No comments:

My tornado of thoughts on Wattpad

Wattpad, if you haven’t heard of it, self-describes as “a global multi-platform entertainment company for stories.” Basically, it’s a self-publishing platform. Write a story, add cover art and multimedia if you want to, hit publish. Boom. You’re an author. To make money, Wattpad sells ads, which they plop into every story. They can make more money still if a story gets really popular and movie studios and traditional publishers want to buy it. (As I understand it, writers keep all the rights but Wattpad co-brokers the deals and takes a backend.)

Any way you look at it, Wattpad is a fascinating platform. I signed up a year ago, but didn’t get involved. I was considering writing stories for them for cash. I was close, but eventually declined for two reasons: 1) I wanted to work on my new book, and 2) they asked me to sign a non-disclosure agreement. Since then, I’ve grown curious about the site again, so I’ve been putting in some time to get to know it.

Before we get to my thoughts, here’s some stats that I pulled from around the internet:
These numbers make Wattpad important, and so does the technology the company employs. Analytics. Interactivity. Ads. The Wattpad model *could* be where all publishing is heading.

One thing about Wattpad: there's not much bandwidth allocated for literary fiction. In fact, the platform does not even include “literature” or “literary fiction” as a genre. It does, however, feature these categories (and others):
I can deal with literary fiction being off Wattpad’s radar. Thankfully, at least for now, literary fiction is welcome elsewhere. It gets the big prizes and some degree of respect. Perhaps not the commercial success of the vampires and werewolves, but that's fine. Most of us who write literary fiction have grown used to working full-time and writing on the weekends and early mornings. Sure, our backs and relationships suffer because of it. But we don’t mind! Writing is selfish! It’s our choice to do it! No one’s holding a gun to our heads!

However, the success of Wattpad makes me worry that it’s not just literary fiction that is being squeezed further and further to the margins. But that quality storytelling—among all genres—is being marginalized, too. Never mind the horrendous book covers that you find on Wattpad and the fact that their tech is absolute shit at saving revisions, the Wattpad stories that I’ve tried to read so far are bad. Very, very bad. Which is very, very concerning. I’d stick some samples up here but I’m afraid the Wattpad lawyers would come for me.

And yet… Wattpad still remains a tempting platform for me. Why? Eyeballs. Wattpad, potentially, gives me access to loads. Eventually, through an alchemy that I haven't yet mastered, those eyeballs could turn into more sales for my first book and, if it gets published, for my second book, too. So I’ve put one short story up the site:


It’s an old speculative fiction/sci-fi romance that I shortened and spruced up. But it’s also literary-ish. I’m curious to see if it gets any readers. If it does then this blog post could be a stellar example of biting the hand that feeds me. Let’s hope so!

By the way, I know I just said that there's no love for literary fiction on Wattpad, but Margaret Atwood is a Wattpadder! (She is also a speculative sci-fi writer though. Lines are blurry.) Atwood co-wrote a story called The Happy Zombie Sunrise Home, which has 1.3 million readers. Other than that story, and some contests, I’m not sure how active she is on the platform. But she is on it. So why not me?

Eyeballs and Atwood aside, there are lots of other positives about Wattpad. Cheesy as it sounds, what the company describes as “writer empowerment” is definitely happening here. For example, Wattpad is a:
But still… the quality. The quality of much of the writing concerns me. My response to my own critique is this: "Relax, Saso. This is the concern in bookstores, in galleries, in movie theatres. It's called art! It's called subjectivity!"

Posted by Emily Saso at 6:00 AM No comments:

“Can I have your seat? I’m trying to edit my new novel on this commute and the odds are already really against me.” 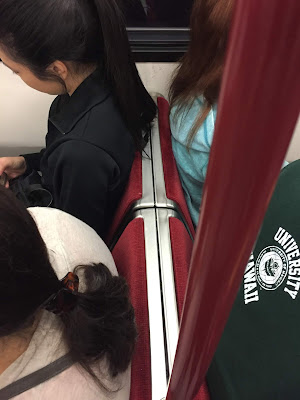 Posted by Emily Saso at 4:58 PM No comments:

Newer Posts Older Posts Home
Subscribe to: Posts (Atom)
This blog is about the ups and downs of my writing life.
www.emilysaso.com